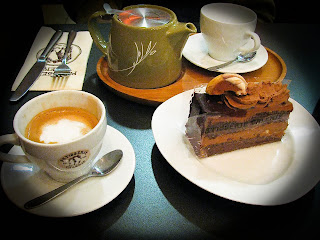 "What questions do you have in mind?" I asked my companion.

"What are the most significant outstanding questions about this case?" Sherlock Holmes asked in return. "In your opinion," he added.

"Well," I said, "I can follow the train of thought that says by the middle of last summer, Gareth Williams may have seen enough to deduce that the 'Terror Threat' -- particularly the danger posed by the 'Liquid Bombers' and the 'Easter Bombers' -- was not as billed, but something else entirely.

"I can see how this revelation could have led to internal turmoil for him, and I think your analogy of a dam breaking may be spot-on. And yet, we haven't spoken to anyone who talked about Gareth going through any significant personality changes, or developing what a teacher might call 'an attitude problem.' On the contrary, Sian Lloyd-Jones told us that just before his death he was 'happy and warm, the same as he always was.'

"If we're on the right track, I would have thought his inner turmoil would show after a while, but apparently it didn't. So I wonder how that could have happened. As you pointed out, he was never going to be a great actor."

"That is a very good question, Watson," he said. "What else comes to mind?"

"I think you may be right about Gareth's secondment from GCHQ to MI6 being part of a trap," I replied. "But he was brought down to London last September, and he lived here until the middle of August. If indeed he was targeted for a murderous attack and brought here to facilitate that, why do you suppose they let him live for so long before they struck? Surely they could have attacked him as soon as he got here, and if they wanted to paint him with false evidence of deviant sex, that shouldn't have taken a whole year to accomplish."

"Another good question," he said. "That makes two. What else?" 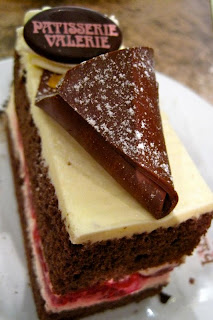 "My third question," I continued, "is closely related to the second. If he was, or was perceived as, a security risk of some kind, and was silenced for that reason, wouldn't they have wanted to do so as soon as possible? Wouldn't it be dangerous from their perspective to give him opportunities to leak secrets, if that was his intent?"

"Three out of three," said Holmes. "Are we missing anything?"

"Why would Gareth travel to Holland Park -- five miles from home and work," I replied, "to sit and wait at the back of a pastry shop near the tube station? Who were the couple he was meeting there? Why were they meeting him? And why are the police evidently less interested in them than we are?"

"I've lost count, Watson," said my friend, "but those are all good questions. Crucial questions, indeed. What would you say if I told you they all might have the same answer?"

"I would be amazed," I replied. "Are you serious?"

"Yes, of course!" he answered. "The following is speculative, but it may not be unfounded. Suppose Gareth came to understand that all the scary stories about the 'bombers' were frauds, and that he had been helping to perpetrate some very damaging hoaxes. What could he do about it?

"He might have tried to 'work within the system' by bringing the matter to the attention of his supervisor. If so, what do you think would have happened? Gareth would have been told, 'We'll look into it,' but nothing would have come of it, except they would have begun to see Gareth as a threat.

"Perhaps that was the option he chose. If so, it could easily have led to the sequence of events we have been investigating.

"Another option that could have led to the same sequence of events would involve a discussion between Gareth and his so-called 'best friend,' who worked with him at GCHQ along with her husband. Both husband and wife were transferred to Denver, if you recall, shortly before Gareth was last seen alive, and the FBI were reportedly prevented from speaking to them after his death, by British officials."

"We discussed this possibility on our way back from Wales, if I recall," I said.

"Indeed," replied my friend. "Certainly, Gareth had other options. He could have kept his mouth shut and started looking for another job. It wouldn't have been difficult for him to find a good one, but we have found no evidence that he ever tried to do so. It may be that we have missed something, or that he chose not to follow this avenue. In any event, he continued to work for British intelligence.

"Because he was a gifted logician, Watson," replied Holmes. "I understand the gift from personal experience, and it is a curse as well as a blessing. The gift renders its recipient absolutely incapable of believing something that is false, if he has direct evidence that it is, in fact, false. 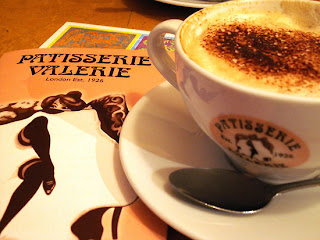 "So I don't think he could have forgotten about it," Holmes continued. "Not with a mind like his. If you've come this far with me, given that he stayed in his job, and given what we know about his personality, then I think you must conclude that he found -- or thought he found -- a way to do something about what he had learned.

"As I see it, either he felt confident going through the usual channels and tried to do so, or else he felt enormous internal pressure, and he needed to release that pressure in a way that would help to rectify the damage he had unwittingly done. Suppose he took the latter route. What could his release have been?"

"Let's look at the problem from the other side," Holmes continued. "Suppose MI6 had custody of a GCHQ officer who was thought to be a security risk. Wouldn't they want to test him? I think they would want to find out what he thought, what he could prove, how far he was willing to go, what information he was willing to give away. They would want to 'capture' anything he was 'tempted' to leak, wouldn't they? And he would have been sorely tempted.

"A 'chance' meeting would have been easy to arrange. Gareth's path could surely have been made to cross with that of a couple of agents pretending to be dissident journalists. Perhaps they claimed to represent Wikileaks. Perhaps they said they were doing something else. It really doesn't matter from this vantage point.

"But if a couple of faux dissidents did establish a relationship with Gareth, and did gain his trust -- which might not have been difficult! -- he may have started feeding them information in the belief that he was helping to rectify the damage the hoaxes had done. If so, British intelligence would have prevented any breach of security, and at the same time would have obtained a very clear picture of what he had learned and what he intended to do about it.

"With the leak contained, so to speak, they could have taken their time making up their minds what to do about him, as they apparently did. They had a full year, Watson, and they used all but a couple of weeks. They clearly were in no hurry.

"Similarly, the police are apparently in no hurry to find the mysterious couple with whom Gareth reportedly had a series of 'chance' meetings in a pastry shop far from home. Could it be that we have stumbled upon the reason why?"

"Do you think this couple are themselves MI6 agents?" I asked.

"Technically," replied Holmes, "domestic counterintelligence is a job for MI5. But it doesn't appear as if anyone were concerned about technicalities in this case. So I wouldn't be surprised if you were right.

"And if that is so," he continued, "all the loose ends of this case tie themselves together in a tidy little knot!"


Next: A Surprising Toast